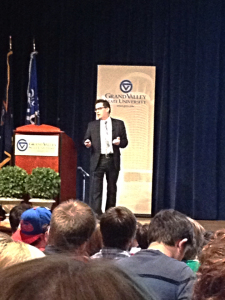 Professor Malin delivered the James W. Carey Memorial Lecture at Grand Valley State University on September 23, 2013. The event celebrated the 10th anniversary of the university’s College of Liberal Arts and Sciences and the 30th anniversary of its School of Communications, and brought out a great group of students, faculty, and other listeners. His lecture, titled “Post-Network Manhood: Television, Niche-Marketing, and the Rhetoric of Masculinity,” explored a number of ways in which the economics of early 21st century American television connects with a collection of hyper-masculine images. Tracing these contemporary images of manhood alongside a series of political, economic, and technological developments impacting the American television system, Professor Malin demonstrated how the growing importance of DVD sales and online viewing, a new emphasis on niche marketing, and the policy changes enacted by the Telecommunications Act of 1994, have influenced the particular masculine images of the contemporary television environment. Exploring these connections demonstrates the close relationship between the political economy of television and particular kinds of gender representations.

You can download a calendar of speakers for the University of Pittsburgh Department of Communication’s speaker series by clicking here.